Navigating the Energies of Life: Ep. 31, the Etz’nab (Flint) trecena May 26-June 7, 2021
Posted by Marguerite Paquin in Podcast
← Back to Blog Home

Expect the unexpected. Expect a little flash and flare, and even a certain amount of “shock and awe”. This is the Etz’nab trecena, and those are the kinds of things that often come along with it. Some of these kinds of events are highlighted in the Maya Count-of-Days Horoscope for May 26-June 7th, and others are highlighted in this accompanying podcast.

This 31st episode of the Maya Count-of-Days Horoscope blog was recorded on May 28th, shortly after the trecena began and contains comments related to symbolism and a number of important events associated with this period, including a number of significant events that have occurred on the first day, including the Super Flower Blood Moon lunar eclipse that just occurred (6:40). 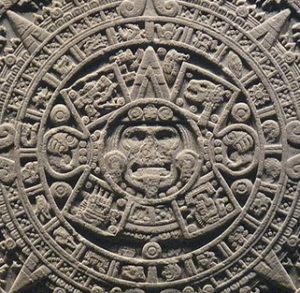 Face at the centre of the Aztec Sun Stone, National Museum of Anthropology and History, Mexico City. The heiroglyph for One Flint is above the face, on the right side of the triangle.

Included in this episode are: connections between the One Etz’nab energies of the first day (May 26th) and the Aztec Sun Stone (8:01), the two patrons associated with this period (11:52), the “sacrifice and separation” aspects of this trecena (16:08), and selected events associated with important days, one of which is 9 Kimi, which was in place when the pandemic “officially” began (16:41). A brief review of the changes over two cycles is also included.

Since this was recorded shortly after the trecena began, and several “shocking” events have already happened, several of these are addressed in conjunction with the energies that were in place when they happened. The Three Ajaw Burner Day (22:44) on May 28th was particularly consequential – and shocking – particularly as it relates to the US Jusice system, First Nations “Truth and Reconcilation”, and the Fairy Creek logging blockade.

Several people born within this trecena are highlighed in this podcast, including British PM Boris Johnson, Senator Bernie Sanders, and Lewis Carroll, author  of “Alice in Wonderland” and “Through the Looking Glass”. An interesting article about the “evolution” of Alice in Wonderland can be found in “The children’s book that’s really for adults” and in this information about the Victoria and Albert Museum exhibition.

An introduction to the workings of the Maya Calendar can be found in Episode One of this podcast series.