Birth dates and their connections to the Maya Count of Days
Posted by Marguerite Paquin in Calendar concepts, Maya Calendar Daysigns
← Back to Blog Home

Do you ever wonder what “drives” you? What is “the force” that keeps nagging at you, that keeps prompting you in particular directions? The ancient Aztecs had a word for it: the tonalli, the animating life force connected with vigour, energy, soul, and destiny. While this is discussed in much greater depth in Manual for the Soul we can look at how this manifests in the context of any given daysign within the 260 day Maya Count of Days.

As discussed elsewhere, the Tzolk’in is an energy tracker. Its foundational form consists of twenty 13-day “trecenas”, each of which has a different theme, a diffferent “energy code”, so to speak. And every person of this planet has a birth energy that can be found within this framework. You arrived on this planet under the influence of a particular energy, within a particular trecena. For both the ancient Maya and current still-practicing “daykeepers” that day – the energy on the day of your birth – would have given you both your name and your destiny. That would also be your the tonalli, your unique “essence” that animates the life force that drives you.

For some, that animating force might be oriented around “wind/breath, or spirit” (the “Ik’ energy), for instance, contributing perhaps to an orientation towards working with the unseen, whether it be in a scientific sense, a practical sense, or a mystical sense. Such a tonalli might also steer the “bearer”of that energy in the direction of communications, working in some way with wind/breath, or spirit. Many musicians tend to be born under such an influence. Other forces within the Tzolk’in cycle might prompt individuals born under those influences to engage in other endeavors, more in accordance with their own particular birth energies, that could align them with interests in a wide range of fields.

In each case, each individual is unique. The birth energy located within the Tzolk’in provides the starting point for identifying the forces that work together to define the specific energy carried by any given individual. This starting point consists of the energy of the day itself, in combination with the energy associated with the number. But many other factors and forces are also involved, including the time of day, the placement within the trecena, and a multitude of other layers and influences. 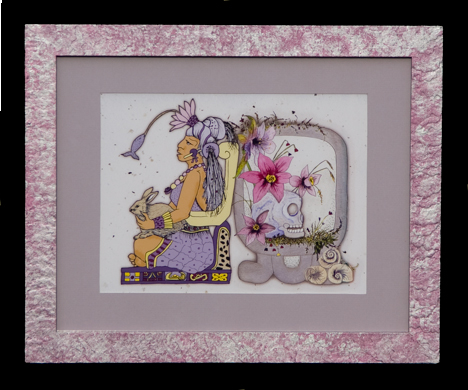 An example of a daysign “portrait” –  in this case this is One Kimi, showing the Moon Goddess (representative of the Number One) with the Kimi daysign. As there are 13 different numbers and 20 different days within the Tzolk’in, there are 260 possibilities as to how any specific day could be depicted from the perspective of the Maya Calendar and Maya mythology. And this isn’t all. Many other elements combine to specifiy any given day, so an even fuller portrait could be developed with the addition of those. Limited Edition Giclee print by Marguerite Paquin. An example of the daysign portraits that can be special ordered through Maya Calendar Arts.

A full reading of any given day provides a “lush view” of the forces that shape that day and thus influence a given individual’s life direction. The specific combination of energies that amalgamates to “shape” a given life is, in fact, so unique that it takes some 468 years before the principal components of that combination will return to the same alignment that was in place at the time of any individual’s birth.

While I have discussed the importance of the Calendar Round return in an earlier post, which tends to be an important milestone in one’s life as this represents a realignment of the day/month energies that influence one’s birth, the fact that one would not fully realign with all the key energies of one’s birth during one’s lifetime (unless you lived to be 468) testifies to the uniqueness of every individual being.

While I often include commentary about birth energies within the Horoscope Blog, such examples are, for the most part, relatively simple references to daysigns. Occasionally I have provided special overviews that include more detail (as in the David Bowie tribute which I posted shortly after his passing in 2016). But even this was relatively brief. If you would like to learn more about the combination that pertains specifically to your own life – to identify your own the tonalli and related forces that help to shape your life and destiny – please see the “Readings and Coaching” section of this site for options for deeper explorations. If you are interested in special imagery or talismans that could help you to connect more fully to the energy gifts of your birth please see our Jewelry section and Personalized Artworks . The artworks are samples only. Many other options are also available.