While most of the focus of my Horoscope blog has been on the nature and cycling of the days and trecenas (13-day periods) within the Maya Calendar, as these energies relate to current events, we are now coming into a time zone that is echoing some very important energies associated with a Maya Long Count time period called a Calendar Round.

Tying in with the March 5th notation in the current Chuwen trecena blog, coinciding with the Maya day 5 MEN (an Eagle day associated with precision and high vision), this day marked the Calendar Round anniversary of the day in 1965 when Soviet Cosmonaut Alexei Leonov made the first space walk, from the Voskhod 2 spacecraft. In the Maya Calendar the Long Count date at the time of that space walk was 5 MEN 18 K’AYAB’ G6, with 5 MEN being the day, 18 K’AYAB’ being the month, and G6 being the Night Lord, with each of those components representing a particular energy. The nature of any given day, as seen through the lens of this calendar, is composed of an amalgamation of the qualities of those energies. As each of the component pieces (numbers/days/months/ night lords) interact with one another in different ways over a 52 year period (actually 52 years less 13 days) each and every day during that long span of time was seen as being unique. Then, after 52 years of unique days, those energies realign, bringing a return of that very specific overall energy influence.

Seen as a Calendar Round return in the Maya Long Count, the Aztec saw this as the “binding” of a 52 year period (4 x 13 years – important numbers in Mesoamerican calendrics), which they celebrated with New Fire ceremonies involving the extinguishing and then re-lighting of all fires to mark the transition to a new cycle and to confirm the continuity of the world. 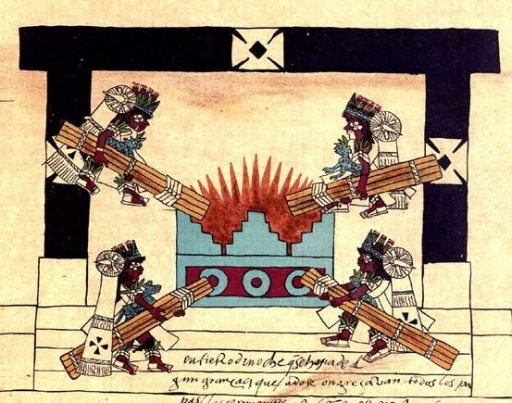 The New Fire ceremony from the Codex Borbonicus

For individuals the time period associated with one’s personal New Fire can often be quite traumatic. “Rumblings” related to this can often be felt a year or two before the actual return to the energies that were in place at the time of birth. The rumblings can often manifest as a kind of “uneasiness”, as in the need to do something different, but can frequently ramp up into a call for a full scale overhaul of one’s life, a call by one’s personal “energy code” to live more fully in accordance with one’s purpose. In situations where the individual has been living more in alignment with someone else’s programming or expectations, that “call” can become a roar that can trigger a vast, generally life-altering, shift.

So how does this apply to our current age and our very stressful current times? In essence, we are now going through the energy “echoes” of some highly significant historical eras. One of great importance harkens back to the start of the U.S. Civil War, a war over radically different ideologies. Sound familiar? Indeed, the energy combination mentioned above, which was in place on March 5th, in addition to being a one Calendar Round anniversary of the energy in place at the time of the 1965 space walk, was also the energy in place two Calendar Rounds before that, in 1861, at the start of the U.S. Civil War.

As we look back at the events and state of the world over the last three Calendar Round cycles we can see how the energies that we are experiencing now are echoing the circumstances in place at this point in earlier cycles. In 1861 the early months of the fierce battle to abolish slavery were unfolding. In 1913 the events leading up to World War I were coming into place. In 1965 the battle for liberty for African-Americans began gaining strong momentum, resulting in the acquisition of such freedoms as voting rights and desegregation. In 2017 battles are being waged on multiple fronts to address political, social, cultural, and gender-related inequalities and issues on many levels worldwide.

As happens on personal levels, it seems that these energies also prompt us collectively to think and act “differently” in order to change the status-quo and take “evolutionary” leaps towards greater options for everyone. By pushing through the hurdles in past cycles, the Emancipation Proclamation of 1862 was brought about, space exploration was opened up, and civil rights began to be addressed in significant ways. And now, of course, the nature of humanity’s current challenges are being revealed in mind-boggling ways. Hopefully we will be able to push through these as well to bring about the shifts that are so greatly needed in so many areas. As we work through this, pertinent Calendar Round/New Fire touch-points that echo events from past cycles will continue to be posted in the Horoscope blog in the context of the trecenas.