Why is the Maya Calendar important?

It is important because this calendar is not just a timekeeping system, but a kind of “technology” for encoding and tracking the qualities of days. Mayanist Karl Taube points out that this is

” . . . a much more lush view of time . . . Every day is going to have multiple, multiple inputs. It’s going to have multiple shadings of possible meaning. In a way, it’s a richly rewarding way to go through time. You are not just ticking off a day in your calendar. Each day is just percolating with all of these different meanings and recollections and hopes.”

The most fundamental component of ancient Mayan calendrical timekeeping is the 260 day Tzolk’in (“Count of Days”), which combines 20 unique days with 13 numbers to create a cycle of 260 days that are continuously counted, with each “number + day” having a special meaning.

The “number + day” that would have been in place on the day of one’s birth would represent the specific energy gifts given to whoever was born under those influences on that particular day.

Although one or two word descriptors can do little more than hint at the deeper meanings and cosmological associations that pertain to each of the daysigns the following notations hint at some of the energies that are aligned with each: 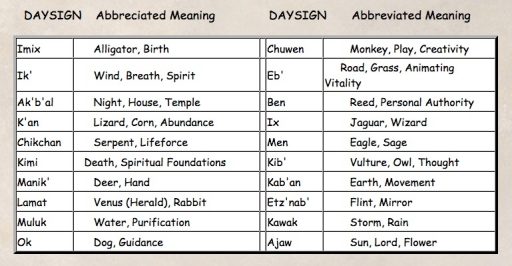 The 260 day Tzolk’in interlocks with the 365 day Ha’ab to form a “Calendar Round”, which involves the cycling of the days in cyclical 52 year periods, within which every “day + month” combination is unique. Given that the Maya Ha’ab does not incorporate extra days for the leap year it takes 52 years less 13 days before any specified Maya day returns to any given Gregorian date. One’s Gregorian birthday, for example, correlates with a different Maya day each year. The Maya equivalent of the Calendar Round position (the “day + month”) on the day of one’s birth does not show up again until 13 days before one’s 52nd birthday. This is a special day that, traditionally, was called the “New Fire”, which was  celebrated as a time of renewal.

Note that authentic Mayan timekeeping is primarily solar, based on a solar-oriented cosmology. Lunar aspects are incorporated into extended Long Count calculations.

In the early days of Mesoamerican exploration much of what was found was deeply mysterious – strange imagery, unknown forms of writing, complex carvings, monumental temple sites. It was some time before researchers could make sense of any of it. But by the late 1880’s it had been ascertained that the Classical Maya civilization had developed a complex and highly precise calendrical system that tracked the movements of the universe and recorded great cycles of time. It was many more years, however, before agreement was reached on correlations between this ancient timekeeping system and the contemporary Gregorian calendar.

Reflecting the work of researchers Goodman, Martinez, and Thompson, the GMT correlation, as it is known today, correlates with dates that were used in the Classical era city of Tikal and has also been found to match the calendrical count still in use by Guatemalan daykeepers who have kept the count going, unbroken, for thousands of years. Although a two day variation on this correlation can be seen in some older books, most people now honour the traditional correlation.

Through use of this correlation it is possible to access and explore a variety of time-oriented cycles, including the Tzolk’in (the sacred “Count of Days” that forms the basis for all Mesoamerican calendrical systems), the Ha’ab (a 365 day cycle involving 18 months of 20 days + a shorter period of 5 days), the 52 year Calendar Round, and the Long Count (a multi-layered system for tracking and recording large cycles of time). What many have referred to as the “end date” of the Maya calendar on December 21st, 2012, was never seen as an “end date” to the Maya, but rather the conclusion of a Great Cycle of 5200 Long Count years, which began and ended on Maya date 4 Ajaw.

The hysteria that many were feeling in 2012 was based upon gross misconceptions about the nature and purpose of the Maya calendar and a great deal of media hype that promoted “world ending” ideas. Many who were promoting such notions had little or no knowedge of the real workings of the calendar or its imbedded meanings. There was never any bona fide prophecy that said the world would end at that time. Dec. 21st just happened to be the Gregorian equivalent to 4 Ajaw, which was the energy that was in place at the beginning of the cycle that began in 3114 B.C., with the 4 Ajaw of Dec. 21, 2012 being that same energy, this time marking the end of the 13th Bak’tun in the Mayan Long Count calendar, and the completion of a “great cycle” of 1,872,000 days. A new cycle began at that time.

From the perspective of the Gregorian calendar the day correlating with “New Year’s Day” in the Maya Calendar Round “moves” every 4 years to accommodate the extra “leap” day. In the year 2019 the Gregorian correlation for the Classical Maya New Year is April 1st, (8 Eb’ 0 Pop), Long Count date 13.0.6.6.12. In 2020 the Classical Maya New Year is Mar. 31st.

Shortly after the Spanish Conquest in the early 1500’s adjustments were made to Mesoamerican timekeeping systems in some (but not all) locations so that these systems could be “frozen” into alignment with the European (then Julian) calendar. In the years leading up to 2012 many people began following a fabricated “13 Moon” version of the so-called Mayan system that included contrivances such as “days out of time” or days counted twice for the leap year, which was based on a frozen count that is considerably out-of-synch with traditional Mayan timekeeping practices. For further information pertaining to these issues please see John Major Jenkins article titled A Manifesto for Clarity.

For a concise overview of many key components of Mayan timekeeping can be found at this link: The Mayan Calendar.  A good date converter can be found here: Mayan Calendar. The Maya Exploration Center that hosts this decoder also provides colorful Mayan wall calendars.  Information on the Guatemalan Mayan Cholq’ij Calendar as used by contemporary Mayan daykeepers can be found at Saq’Be’, an Organization for Mayan and Indigenous Spiritual Studies.

Our publication titled Manual for the Soul: A Guide to the Energies of Life, which not only looks at the calendar in depth but also connects it to world history and personal biographies, is available through this website.

Other books and resources can be found here: Links and Resources